The Galaxy S20, S20 + and S20 Ultra will hit the market on March 6, 2020, reveals the U.S. website for Samsung. A few days before the presentation, the manufacturer has already launched online reservations allowing access to pre-orders as soon as possible. 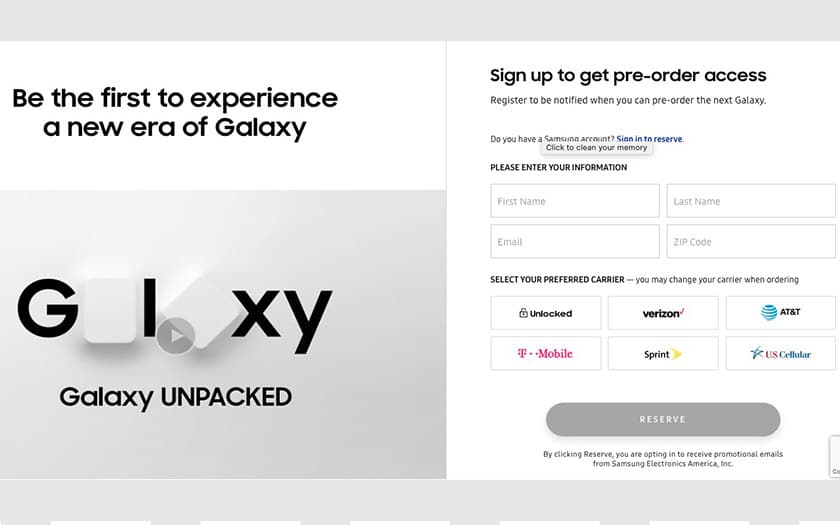 It’s confirmed: Samsung will market the Galaxy S20, S20 + and S20 Ultra from March 6, 2020. The brand has even just posted on its American website a form allowing to reserve one of the three smartphones in the range, a few days before the official presentation on February 11.

This form allows access to pre-orders from D-day and to receive the smartphone from March 6, 2020. To warn registered Internet users of open pre-orders, Samsung agrees to send an email. Via this email, you will be invited to confirm your pre-order and to purchase the smartphone. Unsurprisingly, the booking form is therefore not binding.

As a reminder, Samsung had already done so when the Galaxy Note 10, Galaxy S10 and Galaxy Note 9 were released. When the S10 was released, the reservation made it possible to take advantage of several discounts on accessories and to participate in a take-back program for an old mobile at an advantageous rate. This is clearly not the case this year.

The official site of Samsung France is not to be outdone. The site indeed offers to pre-register “to be among the first to discover the new Galaxy”. Unlike the American site, it is obviously a simple newsletter intended to warn fans of the opening of pre-orders. Please note, the French site does not mention the date of March 6, 2020. However, the release dates in Europe and the USA are expected to match. We will tell you more as soon as possible.