Huawei will deploy EMUI 9.1 on 5 smartphones

Huawei announces the deployment of the EMUI 9.1 update on 5 smartphones in its catalog in July 2019. The following month, eight other phones will receive the latest update of the overlay despite the setbacks of the manufacturer with the government Trump. 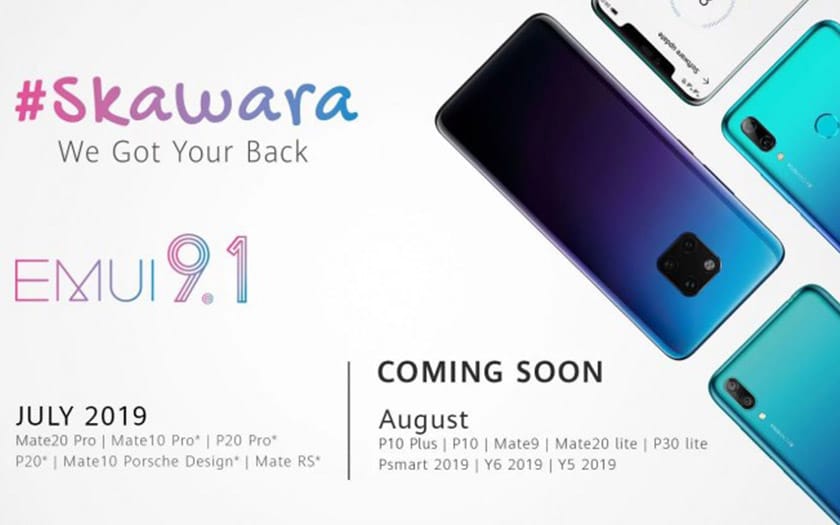 Huawei confirms deployment of the update on 13 smartphones this summer

Huawei South Africa has confirmed the deployment of the EMUI 9.1 update on 13 high-end and mid-rangesmartphones released in 2018 or 2019, report our colleagues at GSM Arena. Most of the devices on the list had already been announced in the EMUI 9.1 deployment schedule unveiled by Huawei  at the end of June.

Similarly, we note that the output of the firmware has fallen a bit behind. Some of the devices put forward by the South African branch should have already received EMUI 9.1 last June. Discover the complete list below for the month of July 2019:

Some models expected to receive the update in July will finally have to wait until next August. In the process, Huawei confirms the availability of EMUI 9.1 on a handful of midrange devices , such as the P Smart 2019 or the P30 Lite. The Smart P was not listed in the previous deployment schedule.

As a reminder, up to 49 smartphones Huawei and Honor should receive the update EMUI 9.1 in the coming months. Despite its exclusion from the US market and the uncertainty of recovering its Android license, Huawei has also promised to deploy the Android 10 Q update on 16 smartphones in its lineup, including the P30, Mate 20, P20 and P Smart. What do you think of this new deployment schedule?