Huawei MateBook X 2021 Rest and Review with deals: an ultraportable that has the answer

Our Opinion about Huawei MateBook X

The Matebook X is Huawei’s new ultrabook. New components, but similar design to what Huawei has offered us so far, is the Matebook X pro’s little brother the ultrabook you dream of? 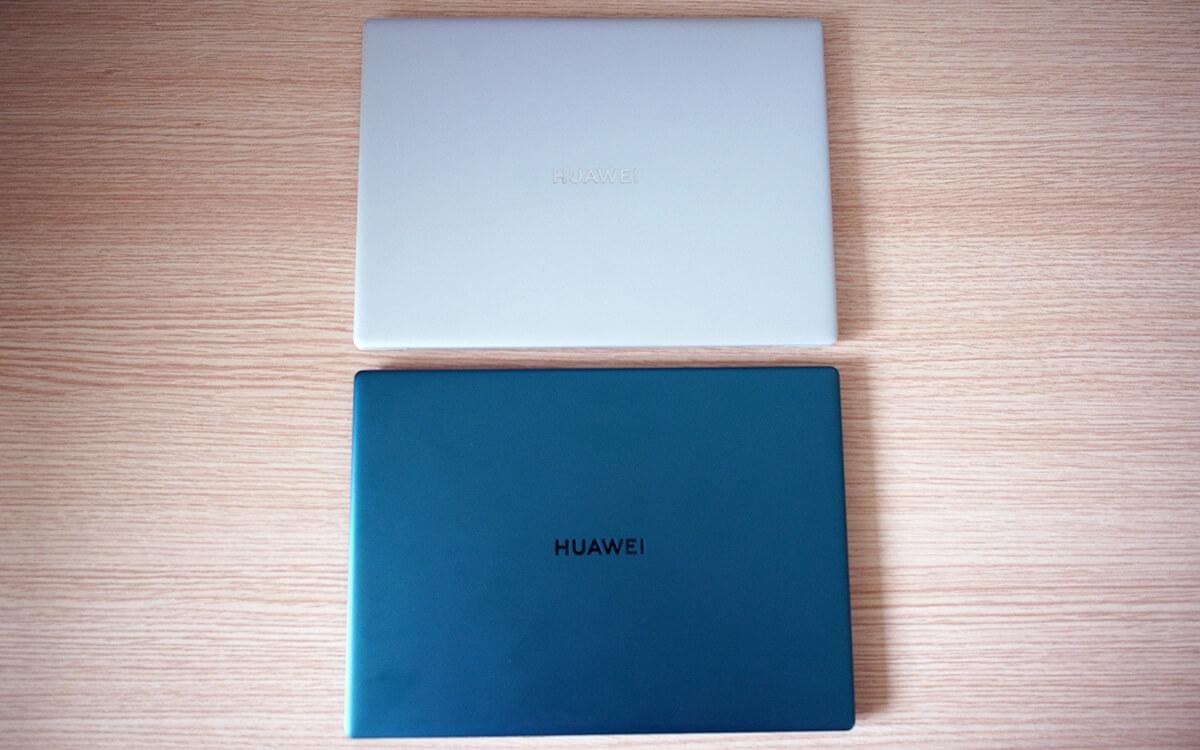 If Huawei has finally released very few smartphones this year in France, mainly because of the embargo imposed by the Trump administration, the Chinese manufacturer has redoubled its efforts on other tech products.

It is in this context that Huawei is offering the MateBook X 2021 edition.a lighter and more affordable version of the MateBook X Pro released last summer.

Despite a formula that may seem worn out, this ultrabook has in store for us some very good surprises. We’re off for a full owner tour through our review of the new MateBook X.

The contents of the box are as simple and light as the Huawei MateBook X 2021 itself. You will obviously find the ultrabook, but also a USB-C cable from one end to the other and an AC adapter for recharging, allowing to deliver up to 65W .

The Matebook X is no exception to what Huawei is accustomed to offering: a sumptuous brushed aluminum chassis , in an ultra-portable format 284.4 mm wide by 206.7 mm long. 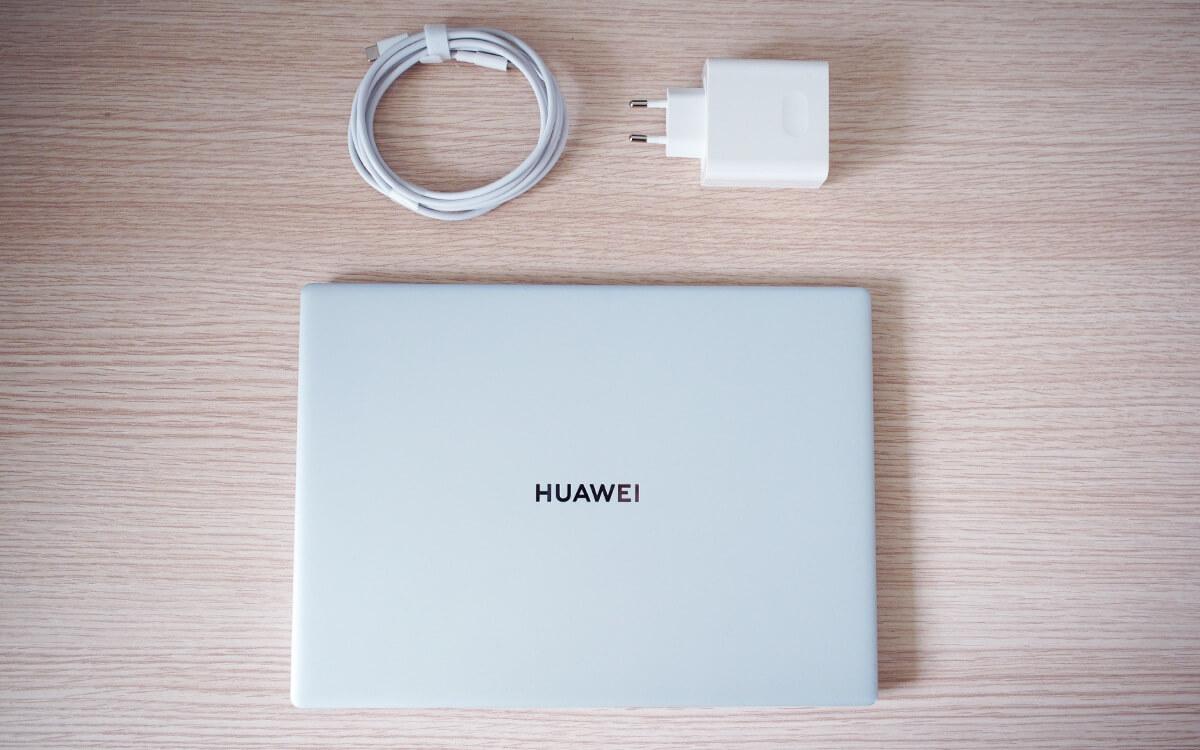 On the top of the device we will discover, as usual with Huawei, the name of the brand, integrated in shiny silver metal which contributes to the premium appearance of the Huawei MateBook X 2021.

Originally, there is a green version (more close to a duck blue), that Huawei did not intend to market the latter on the French store. The manufacturer seems to have changed its mind and we can currently find the two editions in its online store. It would have been a shame to do without this color, which is simply splendid.

To the right of the device, there is a first USB-C connector . On the left is a 3.5mm mini-jack port as well as a second USB-C port . Both will be used for recharging, for transferring data or connecting an external screen.

Two USB-C ports therefore, which can seem problematic if you do not have a HUB integrating USB-A sockets to connect a USB key, for example. This is the price to pay for an ultraportable. The problem will be quickly resolved via a small USB hub or a simple adapter. 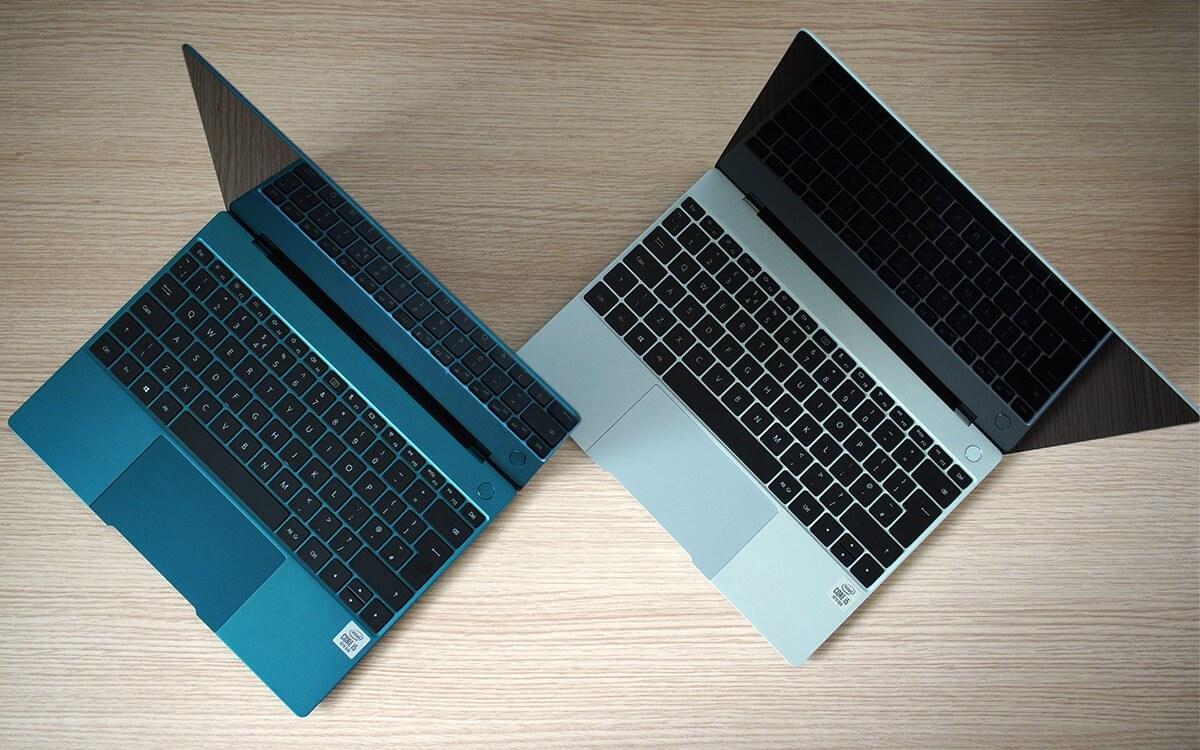 Let’s move on to the bottom of the device: it remains as simple and stylish as the top. Only 2 holes concealing 2 microphones on the front edge and two openings allowing sound to exit to the left and right of the device, each housing two speakers. After a few plays, the sound is surprising.

Obviously, the whole lacks depth in the bass, but listening is very pleasant even at full volume, and does not saturate. All frequencies are audible and well balanced. The Matebook X offers audio quality that has nothing to envy to higher riders . 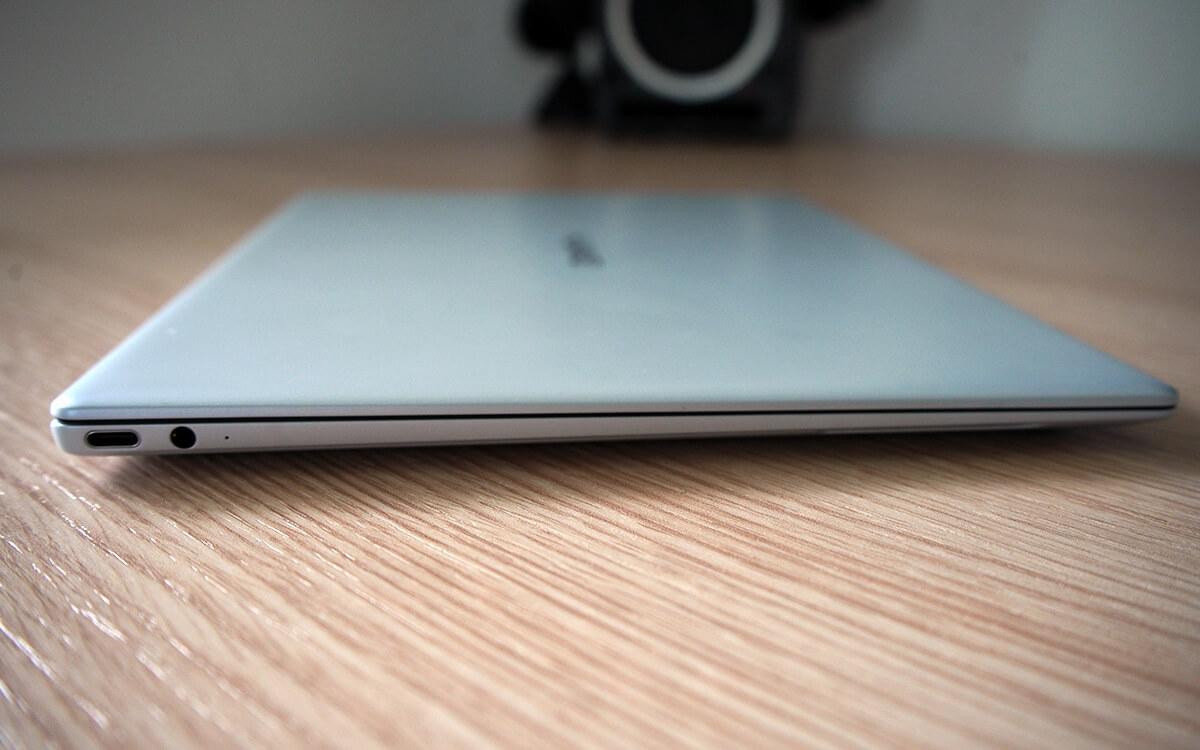 A keyboard with an integrated webcam, the wrong idea?

When opening the Matebook X we find ourselves facing a 13 ”touch screen on the upper part, which we will discuss in detail a little later in this test, and on the lower part, a backlit Chiclet keyboard . The keyboard is large, comfortable: the spacing between the keys of 1.5 mm offers smooth typing and limits typing accidents.

Small negative point, similar to that of the Matebook 14 running under AMD that we presented to you a few months ago : the keyboard backlight only offers 3 levels (off, 50% and 100%). However, even at 100%, the backlight is still quite dim. This is a shame, as it makes it difficult to use in a low light environment.

Especially since the latter automatically turns off after 15 seconds of use. When you do not know the positioning of the keys well, typing will therefore become hazardous the time to reactivate said backlight. 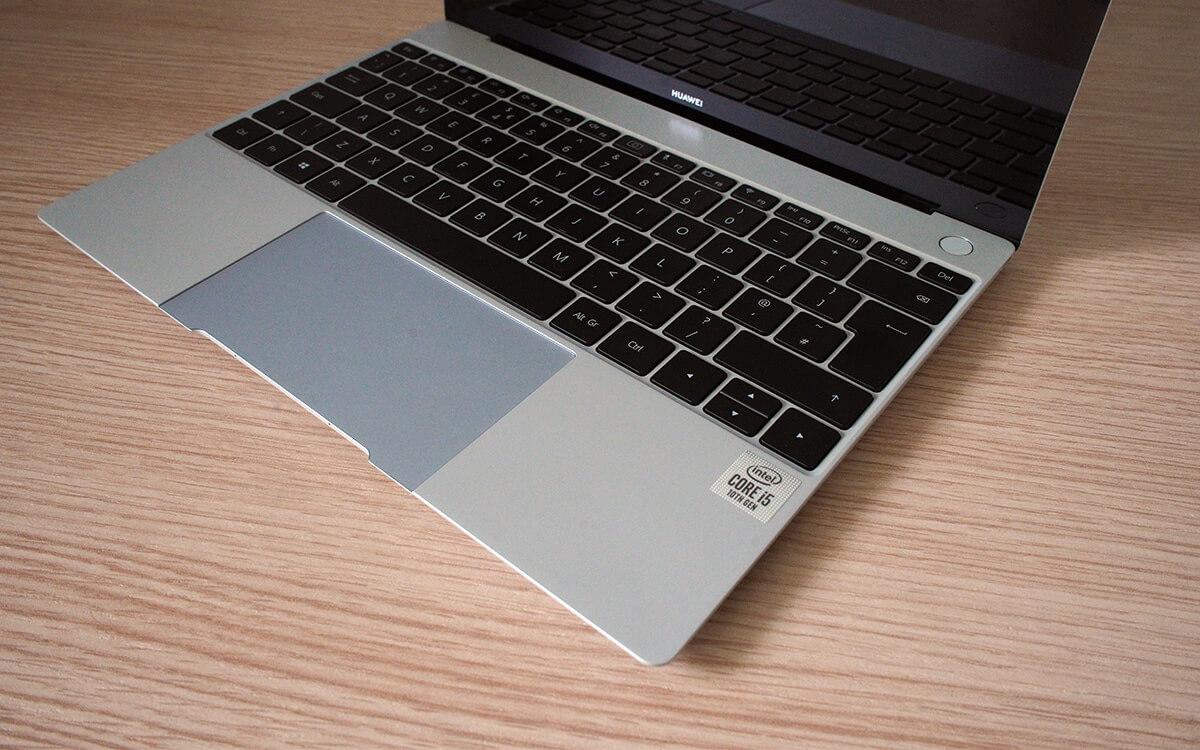 Small specificity specific to Huawei Laptop: the presence of an additional key slipped between the function keys F6 and F7 . The latter actually houses a retractable webcam. In these times when everyone cares more and more about the notions of privacy, the integration of a retractable system is therefore a good point.

However, the placement of the webcam poses various concerns. First, the low-angle framing will not enhance your image. Second, if you type text on the keyboard at the same time as a conference, your interlocutors will have a macro shot on your fingers.

A concern that we can see more and more regularly on laptops offering thin edges and hazardous webcam positioning, which despite everything, has the merit of being present. In terms of video quality, this webcam offers a 720p resolution which seems largely sufficient for the intended use.

A fairly generous touchpad , given the size of the device, takes place just below the keyboard. The latter measures 69mm wide by 119mm long and supports multi-touch up to 4 fingers .

This makes it possible to facilitate navigation between various windows in a single movement. In use, the touch is very responsive and the trackpad surface is more than sufficient, even for large hands. 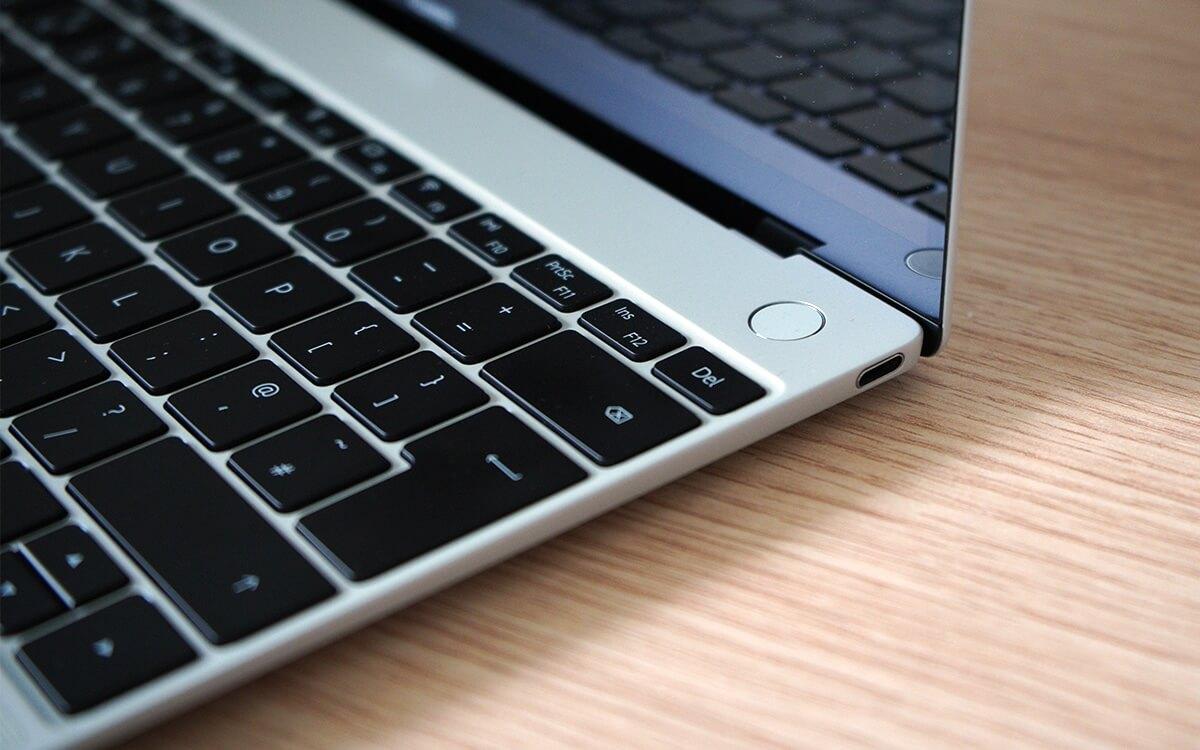 There’s a lot to be said for this 13-inch LCD screen . Let’s start with its ratio. Huawei has gotten us used to breaking codes, and this is also the case here. We are dealing with a 3: 2 format panel , the idea being to offer more vertical space to display information, especially during web consultation.

Add to that a 3K definition of 3000 x 2000with a density of 278 pixels per inch, sprinkle with full coverage of the sRGB gamut, all with 90% occupancy of the main surface. The remaining 10% of space is reserved for the borders measuring respectively 5 mm on the upper part and on the sides, and 15mm on the lower part. Here you get the recipe for the perfect screen for a notebook dedicated to web browsing and office automation. 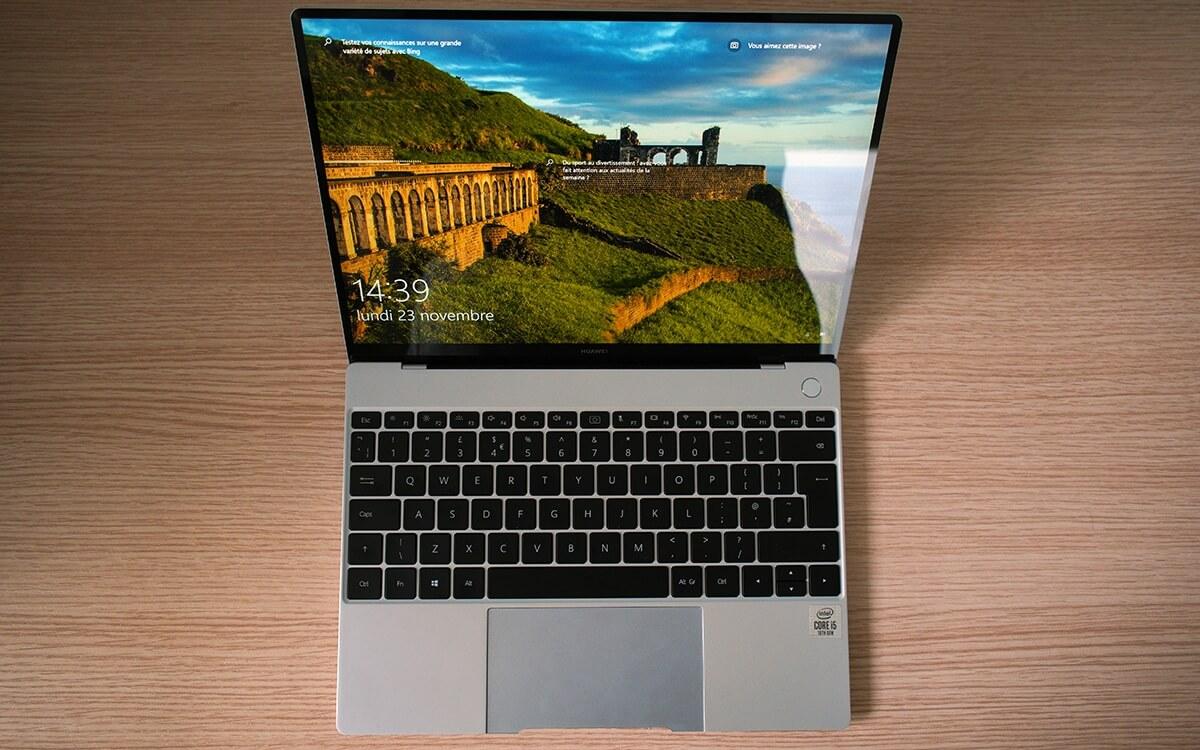 To finish on the technical specifics, the screen of the MateBook X offers a contrast ratio of 1500: 1 and a maximum brightness of 400nits. Huawei announces a viewing angle of 178 ° and we were surprised to find that, whatever the angle, the whole remains very readable and does not lose too much brightness.

Small negative point if one is needed, the panel is unfortunately not equipped with an anti-reflective coating and, therefore, positioning the computer against the light poses a problem. In addition, since we are here on a touch screen, we quickly find ourselves with a good amount of fingerprints when we regularly use this feature .

But it is clear that this recipe works, and that the slab offers a nice restitution despite its relatively small size. The colors are vivid and well calibrated , the details are striking and finally the multi-touch touchscreen reacts without worry.

On the other hand, as said above, the additional integration of a mat screen would have made everyday use even more pleasant , in addition to limiting the visibility of fingerprints.

While the Huawei Matebook X looks good on the outside, it’s also the beauty on the inside that matters. Here we are entitled to a 10th generation Intel Core i5 processor , the i5-10210U, clocked at 1.60GHz and up to 4.20GHz in Turbo . This Quad-core is supported by 16 GB of LPDDR3 RAM clocked at 2133 MHz .

On the operating system side, the set comes with a Windows 10 Home . Don’t expect crazy performance capable of running all the latest games around: it’s an ultraportable, it’s not designed for that.

However, whether in office automation (the whole of this test was written directly on the Matebook X), in web browsing, or to watch videos, the Matebook X remains fluid,

Here are some benchmarks to give you an idea of ​​its general performance: 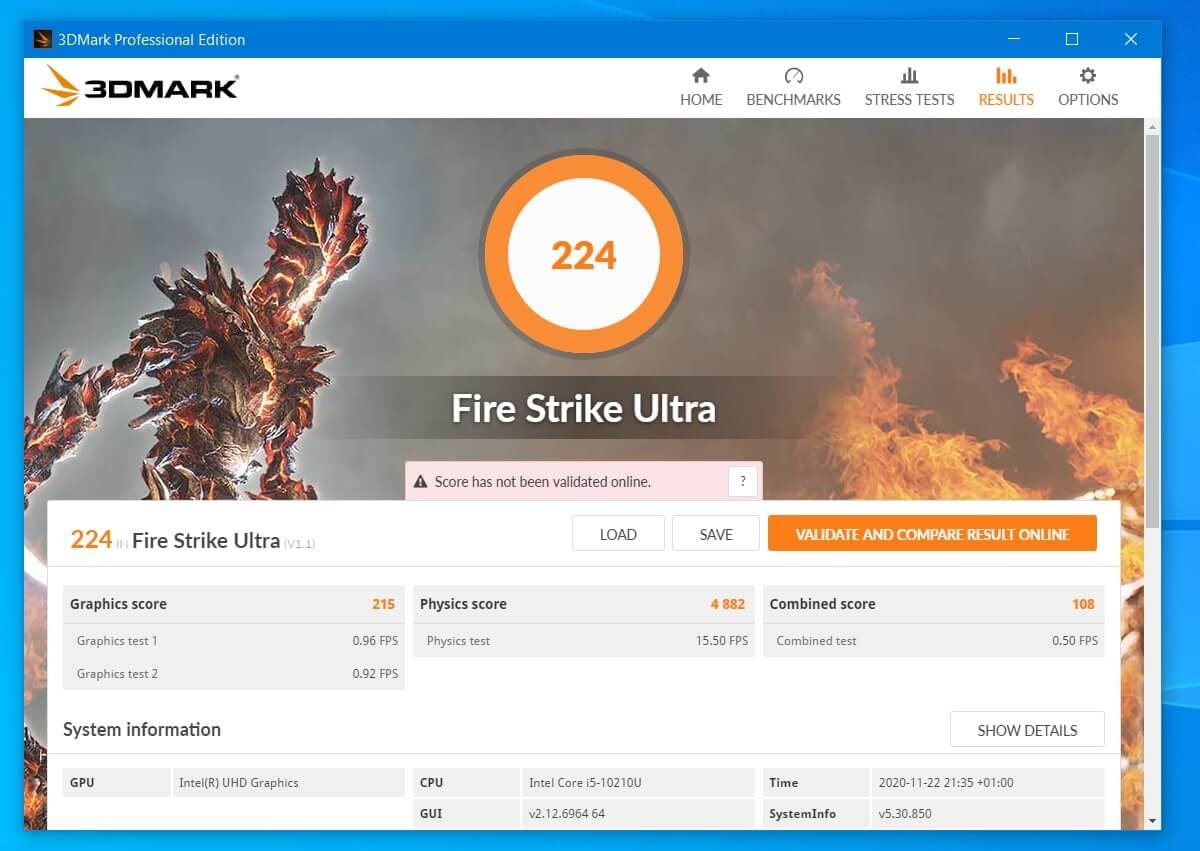 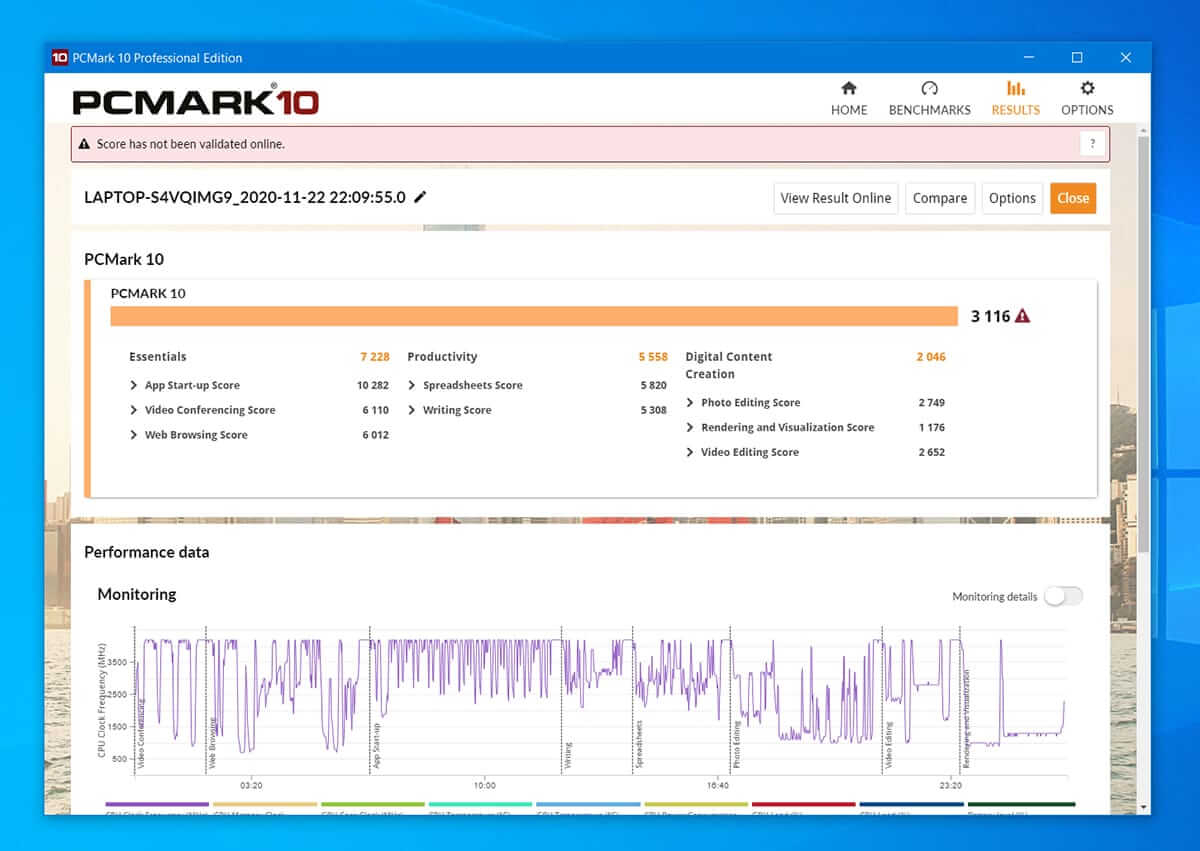 As you can see, the Matebook X doesn’t position itself as a racing monster , but offers great performance for an ultrabook.

It ensures smooth use as long as your applications are not too greedy in terms of resources. In particular graphics, since the entire GPU part is managed directly by the Chipset integrated into the Intel Core i5.

Note also that this ultraportable computer is devoid of ventilation . This results in reduced performance if the system detects a higher temperature than normal.

On the storage side, the Matebook X is equipped with a 512 GB NVME SSD partitioned as follows:

So that ultimately, of the 512 GB announced, only 341 GB will actually be available. If you do not want to impact the system partition. It’s a shame, but sufficient for all the tasks for which this notebook is designed, i.e. mainly office automation.

However, we would have liked to be able to choose a more substantial storage: 1 TB. For example would not have been refused to feel more comfortable in the long term.

Unfortunately Huawei does not offer any choice of storage configuration when purchasing . If you have special needs, you will need to provide external storage for all of your data. 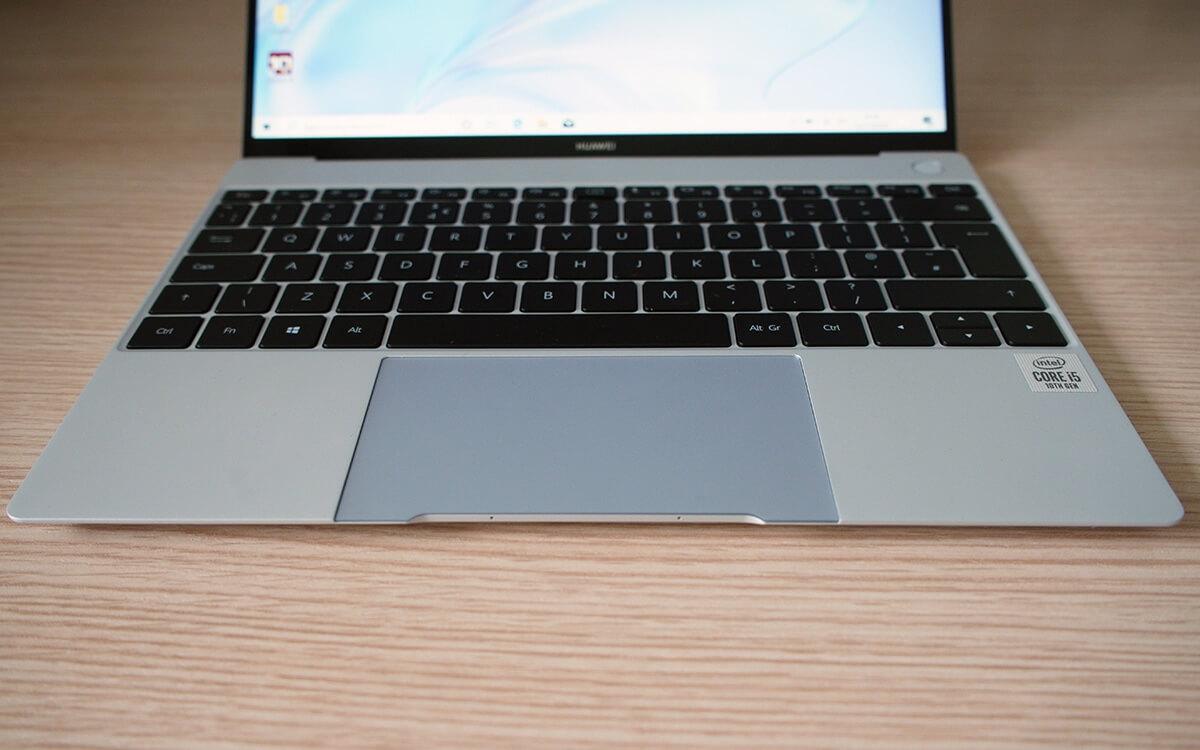 In terms of connectivity, the Huawei Matebook X is compatible with the latest Wi-Fi 802.11 AX. But also Bluetooth in version 5.0.

You will therefore have everything you need for everyday use. both to synchronize wireless headphones or any other accessory. But also to connect to wifi networks while always enjoying the best accessible speeds.

However, and as you can imagine, if you need additional performance. You will need to purchase a USB-C to RJ45 adapter to connect to Ethernet.

You can then reply to your messages directly on it. but also access a good number of applications. A bit like what Windows offers with their “your phone” application.

This system, in addition to being practical. Makes it possible to limit the dispersion due to notifications and to centralize all the information on a single screen. Enough to save time and be more productive.

The Huawei Matebook X is equipped with a battery offering a capacity of 42 Whand up to 9 hours of autonomy. At peak performance and watching videos on various VOD services, the latter lasted slightly over 6 hours .

On the other hand, in energy saving and by writing this test. The battery exceeded the duration announced by the manufacturer of one hour and forty-three minutes .

If you work during the day and you are not a fan of maximum brightness. Then you can, without too much hassle, do without the additional transport of the AC adapter. And USB-C cable. which is a great point. and adds to the ultraportable side of this laptop. 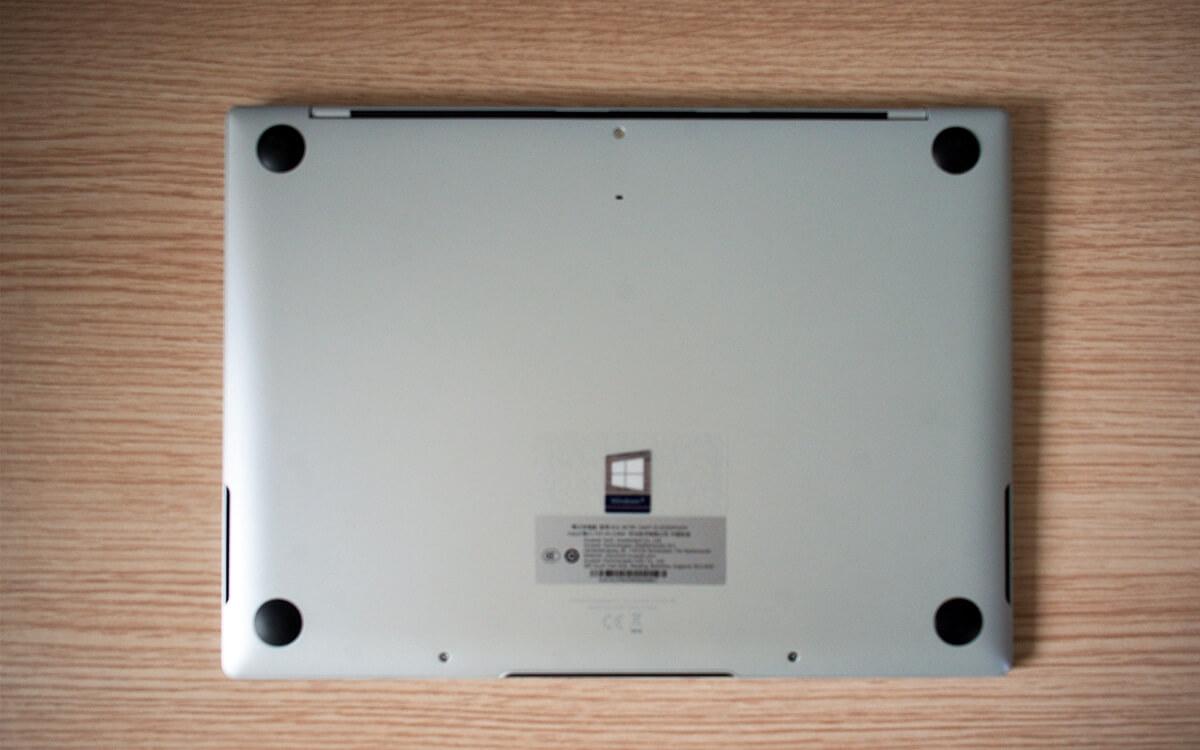 Charging side as shown in the first part, it features an AC adapter capable of delivering 65 W . Once the battery is completely empty.

it only takes about thirty minutes to recharge it to 60%.which allows you to quickly refuel before setting off again.

The performance delivered by this battery .therefore more than correct and will be more than sufficient for the majority of uses.